Our teachers in this yoga studio want to spread love and knowledge about yoga to everyone. The teaching style is creative, dynamic, and fun, with influence from Ashtanga, Vinyasa Flow yoga, power yoga, inversion exploration, Meditation Flow, and kids yoga. Practice here feels like when you practice at home.

Lien grew up in Taiwan and moved to New York for her family in October 2016.She completed the 200 RYT training at the end of 2014, 50 hrs yin yoga training in 2015, and the KRI 220 hrs Kundalini Yoga in 2021. The reason she’s crazy about yoga is it brought her lots of joy and peace and guide her to meet the true self within on the path of learning yoga. She likes to incorporate life into the curriculum and the yoga practice in her class is based on mindfulness to bring the attention of students back to themselves, back to the present. She believes the more people can understand themselves, the more they can live on their own way. And if so, they will live happier and be more confident about their life.

Pla creates safe, innovative yoga classes that inspire students to understand the elegance of their minds and bodies. She teaches with a playful energy that engages and delights. She also encourages students to stretch beyond their perceived limitations and become open to new yoga poses and consequently new life experience. She has been practicing various yoga methods since 2004, she became a certified Hatha Yoga instructor in 2011 and completed her 500 hour advance Vinyasa Yoga Teacher Training in 2013.

Growing up in Thailand, Latdawan learned to meditate when she was a child, and often heard about the word “Samadhi.” But she didn’t know what, exactly, it meant until her curiosity led her to discover Vipassana Meditation in 2002. Through Vipassana Meditation, she began to know “Samadhi” and to understand the true meaning of living mindfully in the present moment. Vipassana Meditation has been her life partner ever since.

In 2003, Latdawan discovered Yoga and fell in love with it. She realized that by keeping her body healthy and finding her physical strength, she could find stillness within her mind and could get to know her own mind-self. With love for yoga in her heart and curiosity in her mind, Latdawan earned her 200-hour teacher training certification at Laughing Lotus Yoga Center in 2012. A devoted student of yoga and in the University of Life, Latdawan continues to open her heart and mind to learning. She is studying Samskrit with the Samskrita Bharati, and is also a Reiki practitioner.

Latdawan’s practice is deeply spiritual, and is rooted in the desire to understand the mind and find a deep sense of tranquility. To her Yoga and Meditation are divine medicine that purify the mind and body, teach how to live in the present, bring balance and peace to the mind, and fill the heart with loving-kindness toward the self and all other beings. She hopes to guide her students toward their own personal sense of clarity and true happiness by sharing this divine medicine. She believes that by keeping this divine medicine in their pockets, everyone can be healthier in both body and mind, will suffer less, and find more space for happiness in their hearts.

Latdawan is deeply grateful to all her yoga teachers and the people who have guided her along this amazing journey. In gratitude, she deeply bows her head to the feet of the Lord Buddha, Laung Phor Jarun and her Buddhist monk teachers.

Siri was born and raised in Trang Province, South West Coast of Thailand. He was interested in yoga at the age of 15, with self-study from local books. Yoga is the specialty of Siri. His style of teaching combines Thai Massage and Vinyasa Yoga together . He believes knowledge is like a river which enhancing the intellect without end, by sharing knowledge and experience with students, all kinds of backgrounds, are part of the journey to the enlightenment of life. Yoga is the foundation of elevating the mind.

Yvonne began her practice of yoga in 2002. Her love of yoga grew as the years passed with her practicing, learning and teaching in China. In 2014, she came to New York to continue chasing her yoga dream, and received her RYT-500 hour certification from YogaWorks. Her class combines the precise alignments with vigorous movement, she aims to teach in a step-by-step manner that clearly illuminates the path to even the most visually complex poses. Yvonne loves to help students to pay attention to the process in their practice in order to achieve more acute awareness of their bodies and minds.

In 1997, due to lumbar disc herniation and cervical spondylosis, she began to practice yoga and benefited from it. She has since embarked on the path of yoga.she graduated from Beijing Tianyue Yoga College in 2005 and was awarded the International Senior Instructor Certificate issued by Hong Kong.

In 2013, She received intensive training at the Iyengar Yoga Academy in Guangzhou.

In 2014, she began to accept John Leebold, a well-known disciple of the “Iyengar” master, and the Tcc teacher training course of the Australian Iyengar Yoga Senior Certified Instructor.

In 2017, it passed the “5th Ai Yangge Yoga Certification Examination in China” and obtained the teacher certification. At present, I continue to follow the study of Ai Yangge’s acclaimed. 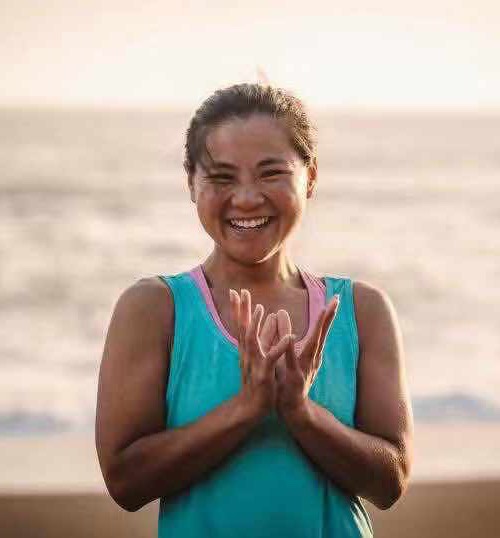 Joyce grew up in Hong Kong and New York. Yoga has transform her mind and body and given her a new perspective in life. She loves bringing joy and laughter to others. She is passionate to yoga and would like to spread her love for yoga to everyone of all ages. She received her RYT-200 certification at Lila Flow Yoga and 25 hours Kids yoga teacher training certification at Yogi Beans. She believes in the body alignment. Yoking the breathe, the mind and the movement will bring one closer to the higher self.

Hi! I’m Pare from Thailand, I started yoga when I was 20 by myself from books, I find yoga so fun and the best workout for my knees. Day by day, I realize I want adjustment to correct my poses, then I go to FL to take my intensive RYT200 for a month. After that I feeling more connected between my mind and body, I feel healthier from inside out and I really want to share for everybody to be happy too:)

My name is Ada . Yoga wasn’t part of my life until 2016, when I took my first class in a fitness center. After a few introductory lessons, I had fallen in love with the mind and body practices. Regardless of the slow and gentle moves they made me felt energetic and fresh every time the classes were over. I also noticed that yoga helps me with my digestive system. My stomach has been acting up ever since my childhood and I had to rely heavily on different medication for temporary reliefs. It was yoga that finally helped to solve this problem few decades long after. The powerful yoga twisting posture is the best natural treatment for me. I decided to obtain the 200 hours RYT. certificate in 2019 because I really want to share this amazing practice with many more people. 我从2016 年开始在一家健身房里无意间接触到了瑜伽 我就深深的爱上了 感觉好像它在那里等了我好久，瑜伽的每一个动作每一个体式都让人感觉很舒服很有力量. 于是在2019 我决定去拿我师资证 我要把这一份爱 和能力传给大家. 我还发现我10 年以来的胃病在练习瑜伽中治愈了，每一次犯胃病就去练习瑜伽中的扭转体式就会让我瞬间缓解下来，扭转的体式是大自然的疗法. 我很希望能将这大自然的疗法带给我的朋友和我的家人走向健康快乐的生活